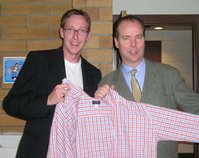 Waterloo-based poet Chris Banks, shown here literally giving the shirt off his back to novelist Douglas Coupland (click here to find out why), won the Canadian Authors Association Jack Chalmers Award for poetry for his first book of poems, Bonfires. That was a couple of years ago. Since then he's been hard at work on book number two, and now the moment of truth has arrived. Chris called me up earlier this evening to say that he had just heard from his editor, Carleton Wilson of Junction Books (an imprint of Nightwood Editions), who had told Chris the book was finally in from the printer, and that he could come by to pick up some copies, if he liked. It was my task, as poet-friend, to accompany Mr. Banks to the Junction Books studio in Toronto in order to collect the books, and then, with the new books in hand, to go somewhere and drink some beer with the celebrated author. This we did. And it is my pleasure to say: mission accomplished! The book has been properly welcomed into the world, and now, without hesitation, I can recommend it. The Cold Panes of Surfaces is a marvellous follow-up to Banks' award-winning debut. Now here's your part. Knowing his work is so highly-regarded, and knowing he has a generous propensity for distributing fine garments, I think you should make Chris Banks' new collection of poems your choice for poetry reading this holiday season. You'll be glad you did.
Posted by Paul Vermeersch at 23:55