Nick Laird talks about the common ground of poetry and religion. Hmmmmmm.

Among other interesting things, Laird writes:

Though an atheist - in that I believe we're here only by happy accident - my sensibility is religious. I like ritual and heightened states. I like mind-altering drugs. I believe in invisible forces - radioactivity, magnetism, sound waves - and I'm more than willing to sit for an hour listening to a church organist practice, which I did just last week. And I'll let myself shiver along with the immense chord changes. I don't like faith but I'm fond of its trappings- the kitschy icons, the candles, the paintings, the architecture and, especially, the poetry. Though many great religious figures, from Augustine to Screwtape, have taken prose as their instrument for confessing or cajoling, when it comes to praise, poetry's the usual choice. I've been reading Robert Alter's magnificent new translations of The Book of Psalms, and "My heart is astir with a goodly word".

The relationship between poetry, those goodly words, and religion is hard to quantify. Both involve the hidden, working at the borders of the sayable. They share an experiential dimension. Personal religion involves a private speech act (prayer), chanting (psalms), heightened states achieved by ritualised words. The Lord's prayer is one of the first poems I learned. Leached of its import by years of mindless recital, it's almost a Sitwellian sound poem to me.

There's more to Laird's musings in the Guardian. Go read it. Oh, I wish Canadian newspapers had more time and space for these thoughtful, friendly essays on poetry. They're one of the things I really love about British newspapers, the Guardian in particular.

Looking back at Dana Gioia's tenure as chairman of the NEA


Gioia is stepping down from the NEA, but I hope he continues to find ways to promote the arts in general, and poetry in particular, because he is singularly good at it, and he is one the smartest, and most level-headed, in the "business" -- here's an article (in the National Review of all places) by Thomas S. Hibbs profiling his run at the NEA:

Gioia — an award-winning poet and author of the influential article “Can Poetry Matter?” — has been a trenchant critic of the increasing professionalization and isolation of the arts, and of poetry’s smug and self-congratulatory retreat to the confines of academia in particular. After many years as a successful poet, Gioia still thinks of himself primarily as a reader. One of his early shifts at the NEA was away from a focus on the producers of art to a greater emphasis on the consumers of art. “Controversy,” he reflects, “is not an intrinsic artistic concept; it’s a byproduct. I can’t defend things that are wild and crazy for the sake of being wild and crazy.”....

Gioia also shows how populism and intellectual cultivation — accessibility and refinement — need not be at odds with one another. In graduate school at Harvard, he realized that he was being trained to write in such a way that the people who raised him would not understand him. His love of poetry dates from his youth: His mother recited poetry to him from memory. Gioia maintains that preserving a connection to one’s roots and writing poetry that reaches an audience beyond academia are not matters of condescension but of the craft of language — of finding words to invite the “intelligent, non-educated reader” to become a lover of poetry, to be transformed and elevated by the experience of beauty.


Posted by Paul Vermeersch at 05:37 No comments: 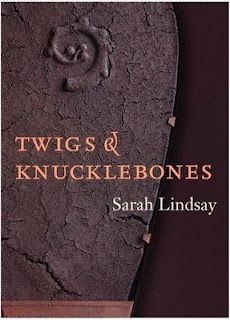 I devoured every word of this book, and went back for seconds. Everything about it appealed to me. Lindsay shares many of my own thematic preoccupations -- particularly the natural sciences -- but she approaches them differently enough that these poems kept me fascinated. Aesthetically, she is marvel, an ace of the discursive style, particularly the free verse narrative poem, which in my opinion is experiencing an incredibly dynamic renaissance in American poetry today, thanks largely to poets like Lucia Perillo, Rodney Jones, Tony Hoagland, Charlie Smith, and, clearly, Sarah Lindsay herself.

Poetry Magazine has eight poems Twigs & Knucklebones on their website.

Poetry Daily has three poems from Twigs and Knucklebones on their website.

Order this book from your local independent bookseller. I've already ordered her two previous books, Mount Clutter and Primate Behaviour. I have a feeling she will be a poet who I will be reading for a very long time.
Posted by Paul Vermeersch at 21:20 No comments:

Insomniac Press is launching Ryan Kamstra's Into the Drowned World on Nov. 18th


Come early for dinner and stay late for the band.
The food, the book and the music will all be excellent.
The readings, etc. will begin after 8pm.
The music starts at 10pm.


-- The night will feature readings by Ryan Kamstra, Nick Thran and more.

-- A prize for the best Madonna costume!

Advance Praise for iNTO tHE dROWNED wORL_D:

Flamboyant, sensuous, and seamed with slick finesse, Kamstra's turns of phrase are more lubricated than 99% of CanLit. His Into the Drowned World will make you want to feel like a virgin, and read like a forager, over and over.
— Margaret Christakos, author of Sooner

The poems of Into the Drowned World keep leaping out of "the shallow grave" of post-modernist, post-capitalist life. These poems, so linguistically inventive, so over the top, so associatively awake, are profound expressions of "a hunger in this world… not even for food."
— Rebecca Seiferle, author of Wild Tongue

Into the Drowned World is a visionary work of pop-culture apocrypha, recited by a nodding, benumbed narrator who is perpetually reliving the day before the turn of the millennium. At its heart is Kamstra's breathless, ecstatic response to Madonna's infamous Drowned World Tour of 2001, which forms both a lyrical and lexical shorthand for our stunted relations, abandoned tenets, and an almost forgotten civil society.

Ryan Kamstra is writer of poems, fiction and songs. His first book of poems, Late Capitalist Sublime, was published by Insomniac Press in 2002. As a musician he is also known by the name Scratch Kamstra, and his band, Tomboyfriend, is fast becoming a cult sensation. Visit him at http://www.ryankamstra.com/

Can't attend the launch?
Order iNTO tHE dROWNED wORL_D.

Posted by Paul Vermeersch at 08:51 No comments: