Hugo Claus, the greatest poet of Flanders, is dead at 78

The writer Hugo Claus has died at the age of 78. He had been suffering from Alzheimer's disease for some time and had asked to undergo euthanasia.

Claus was a universal artist: he wrote poetry and novels, painted and made films.

The character of his work is particularly diverse. He combined the banal and the burlesque with tragedy.

Often classical themes return: love for the mother, hatred of the father, Roman Catholicism and Flanders during and after the war.

His most famous work is Het Verdriet van België (The Sorrow of Belgium, 1983), an epic tale of Flanders under Nazi occupation.

Read the rest on deredactie.be

An excellent selections of his poems in English, Greetings, was published in 2005. It is a book that return to again and again, and I recommend it.

Here is a profile of Hugo Claus that contains some poems you can read online.

Posted by Paul Vermeersch at 20:48 No comments:

This is awesome. Jeff Latosik is a very talented young poet, and I'm happy to see that he's already garnering the praise of his elders, not to mention prizes. Here's some background on the award:

The P. K. Page Founders’ Award for Poetry recognizes the excellence of The Malahat Review’s contributors by awarding a prize of $1,000 to the author of the best poem or sequence of poems to have appeared in the magazine’s quarterly issues during the previous calendar year. The winner, to be chosen by an outside judge who is recognized for his or her accomplishment as a poet, is announced annually just prior to the publication of The Malahat Review’s Spring issue.

Read the rest of the press release here.

I really like Campbell McGrath's poetry. His book Pax Atomica is one of those books that rarely seems to get put back on my bookshelf. I like to leave it out, so I can pick it up and thumb through it when I should be busy with other things. So naturally it is exciting to learn that McGrath has recently published a new collection called Seven Notebooks. Here he is talking about it with the Wall Street Journal:

WSJ: At the end of your poem "June 28" you quote Walt Whitman from "Specimen Days." In it, Whitman suggests that too much knowledge ruins one's enjoyment of nature. You agree?
Mr. McGrath: I think he's being tongue in cheek. He's offering a defense for being slightly casual in one's knowledge. I was eager to take advantage of that defense to cover up the fact that my own knowledge is full of holes. Whitman was a pretty good naturalist; if somebody else said that you might think he was allowing everyone to be an idiot. But Whitman was a cataloguer, especially about Long Island. He knew you had to know things. I take his quote as liberty to recognize that there's a kind of precision that can lead poetry astray. 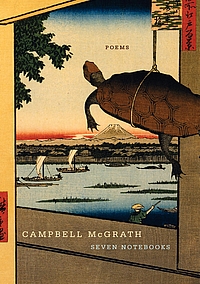 WSJ: What inspired "Ode to a Can of Schaefer Beer," a brew you at one point describe as "tasting of metal and crisp water?"
Mr. McGrath: It was inspired by coming across a six pack of that beer. This beer was an icon in my childhood, and the TV commercials and jingles popped back in my head. It made me wonder: How is it that certain icons live and die, and what does it mean? That's what the poem riffs on. Their ridiculous slogan -- the one beer to have when you are having more than one - - is totally inappropriate now, so it makes you think of the good old days. The culture stays alive, but certain parts of it die or fail, and that's very interesting to me.

Click here for the rest of the interview.
Posted by Paul Vermeersch at 08:49 No comments:

My review of A Long Continual Argument: The Selected Poems of John Newlove, In This Poem I Am: Selected Poetry of Robin Skelton, and Manual for Emigrants by Fraser Sutherland is in the Globe and Mail books section today. Here is a sample:

A good volume of selected poems should be more than a gathering of popular favourites. It should be a discerning encapsulation of a poet's career to date, a book that considers all the poet's aims, aesthetics and advancements. When such a selection is made posthumously, the importance of choosing and arranging the poems is amplified. It is a kind of monument-building, and it can be a harrowing experience for the editor charged with the task.

John Newlove was a major poet whose life's work has long deserved such careful attention, and thanks to editor Robert McTavish, it has finally received it. A Long Continual Argument, the first comprehensive edition of Newlove's poems to be published since his death in 2003, is a fitting monument to the poet's consummate craftsmanship, and a cause for national celebration.

In its time, not long ago, Newlove's poetry was among the most commanding work being written in Canada. It is stark, brutally honest and deceptively complex. As such, it is a lot like the man who created it. In his introduction, McTavish describes his first impression of that man: "I found him self-deprecating and sly, his low tone punctuated with cigarette pauses." The same could be said for a great many of Newlove's poems, like the fretful Blue Cow Phrases: "If I'm disgusted with my life I'm disgusted with yours too./ All we do is invent blue cow phrases dripping thin vapid milk."

Newlove never attempted to hide his disappointment with the world, at least not in his poetry. He often expressed an antipathy that many people feel but lack the nerve to express themselves. He was the pinch-hitter for our secret bitterness, the darker and more forthright part of our conscience. His raw material was the ugly truth; from it he forged poems that demonstrate the intrinsic beauty of all human emotions, not just the comfortable ones, and he understood, as Aristotle and Shakespeare did, that the grandest of them all, the most poetic, is our melancholy. Few have given voice to human sadness as eloquently as Newlove did, as he demonstrates in his poem She:

She starts to grow tears, chemical beast
shut in a dark room with the walls closing
behind her eyelids, all touches hateful,
the white sweep of clean snow death to her,
the grey naked trees death to her.

You can read the whole review here, but this link will only work temporarily, as the Globe and Mail archives its material on a paid subscription basis.

Posted by Paul Vermeersch at 12:32 No comments: