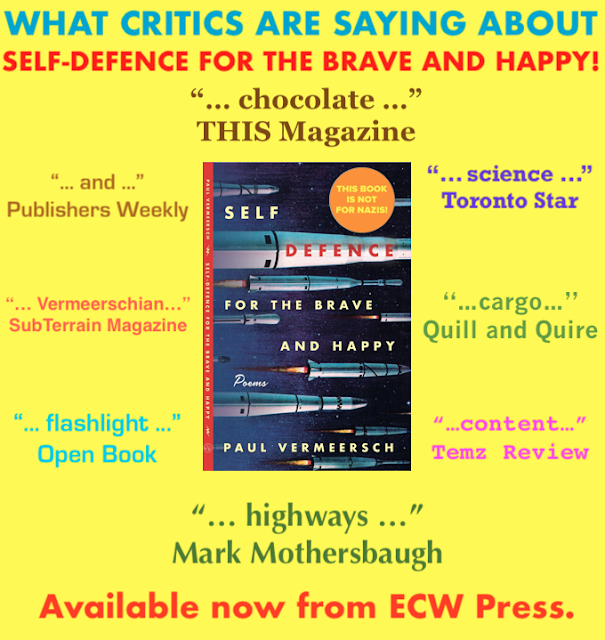 "Self-Defence for the Brave and Happy has arrived, and not a moment too soon! Nothing less than a manual for navigating the current landscape of booby-traps and hidden unravelling. An invaluable aid in this time of troubled spirits, muddled truths, and convoluted thinking. Paul Vermeersch has created a template to help us all traverse the highways and bi-ways of an increasingly confused and confusing world full of misinformationalism and bald-faced lies." — Mark Mothersbaugh of DEVO

"When you can’t trust anything, the poems argue, your imagination becomes the only valid interpreter of reality…. Part inspirational tract (borne of a deliciously playful inspiration, not the usual kind), part prophetic revelation, and all crafted with Vermeersch’s signature elan, Self Defence for the Brave and Happy is a generous chocolate box stuffed with bon(-bon) mots, the perfect gift for your inner visionary. Shine on, you crazy zircon." — RM Vaughan, THIS Magazine

"Vermeersch captures our culture’s anxieties in these eclectic poems, which range widely in form and draw from pop culture, science (particularly in the Space Age) and literature. Our fears take metaphoric shape as age-old monsters such as the bogeyman and the malicious hag of folklore, but also as real-life menaces such as the atom bomb. The tone is not all doom-laden, though, for Vermeersch suggests that the way forward is through our capacity for imagination." — Barb Carey, The Toronto Star

"One of the great pleasures of reading Vermeersch is not only in his attention to words... but also the way a poem drifts from a unique starting point to something wildly unexpected. This Vermeerschian Drift quantum jumps from line to line through humour, surprise, and a ton of ratiocination." — Kevin Spenst, SubTerrain Magazine

"In Paul Vermeersch’s conception, we have no need for fictional dystopias: we are living in one right now. The poet’s sixth full-length collection offers a road map for navigating our current moment. One of the poems – 'How to Protect Yourself from Monsters' – could serve as an alternate title for this frightening, yet paradoxically hopeful, work." — Quill and Quire, fall 2018 poetry preview

"Self-Defence for the Brave and Happy, the sixth collection by poet, professor, artist and editor Paul Vermeersch, feels like a flashlight found in a blackout... it strives to give practical examples of better dreaming for the future." — James Lindsay, Open Book

"A deeply intelligent collection that uses its interest in form to contribute significantly to the thoughtful arguments of its content. It both delights during a quick read and rewards careful re-reading... Self-Defence for the Brave and Happy is perceptive, carefully-crafted, melancholy and funny. The simultaneously critical and wryly amused attitude of the collection is perhaps the only self-defence that we have against time and the monsters of our own creation." — Amy Mitchell, The Temz Review

"It’s like waking from a dream where you’ve been searching through the ruins for — what? Love? Hope? The way back to your world? Only you realize that you’ve been awake all along and the dreams you have are the moments of clarity amid all the madness. Or maybe it’s the other way around. How can you even tell anymore?" — Peter Darbyshire

"Self-Defence for the Brave and Happy is a live virus vaccine for our times, inoculating the reader against the surreality of today’s headlines with a healthy dose of its own. Vermeersch’s poems, flavored with 1950s science fiction and Cold War paranoia, are like the dark lenses in John Carpenter’s They Live, providing a way to see our society more clearly as we race toward climate collapse. It’s not with a strict sense of dread that Vermeersch shows us the end, but wit, wonder, imagination and humor." — Jeff Dupuis

"While the collection might begin in some rather dark places, Vermeersch’s use of humour, pop culture, surrealism and collage work to disarm the increasing anxieties surrounding the darkest possibilities of humanity’s demise.... Between the lyric narratives, essay-poems and visual pieces, I’m intrigued by the broadening of Vermeersch’s structural scope, and how everything contained fits so nicely together." — rob mclennan

"Monsters, futuristic machines, and disinformation abound in this dystopian poetry collection that is a survival guide for what’s clearly coming." — The Coil, Most Anticipated September 2018 Books

Posted by Paul Vermeersch at 19:26 No comments: