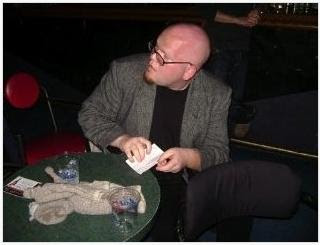 JMM (seen here in an undated photo plotting the demise of his arch-nemesis, super spy James Bond) has won the grand prize at an event some people are calling Harbourfront's Poetry Idol, and other people are calling the Jacob McArthur Mooney ass-kicking show.

But seriously, for me, the night had many highlights, including Ryan Kamstra's reading from Into the Drowned World in a style that can only be called hoboho, and Johanna Skibsrud, author of Late Nights with Wild Cowboys, reading an unpublished poem called "I Do Not Think that I Could Love a Human Being" (this is one of the best poems I've heard at a reading in years, folks, seriously! And I've been to a lot of readings), and so much more. It was a fine night of readings by a bunch of talented young poets, which makes JMM's win all the more impressive. Congratulations, Jake!
Posted by Paul Vermeersch at 15:34

I'm really happy for Jacob- in fact, his was the book I purchased that night. But I'm curious about who would call the evening "the Jacob McArthur Mooney ass-kicking show," which would suggest he was the only standout poet of the evening. You yourself highlighted other standouts- I was pleasantly surprised by sheer number of strong poems, and strong readings of same. I was also pleasantly surprised by the range of poetic styles.

I ain't lookin for names. You don't got to be no snitch. But it seems like a silly thing to say, and it lessens Mr. Mooney's (mr. McArthur Mooney?) victory by suggesting that there wasn't much of a competition.

Geez, KP, there's no need to take it so darned seriously. It's a blog, not a peer-review critical journal. The 'ass-kicking' comment was meant to be comical, as was the James Bond comment. Why not berate me for claiming Mooney was a movie villain? As for the competition, I do believe I said, "It was a fine night of readings by a bunch of talented young poets, which makes JMM's win all the more impressive."

It was definitely a good evening. Oddly enough, the Mooney and the Skibsrud books were the two books I walked away with.

There are a couple more I'll probably be picking up in the near future.