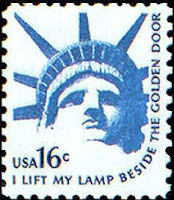 From an editorial point of view, this story is a real gem.

There appears to be an error on the bronze plaque inside the pedestal of the Statue of Liberty, inscribed with the famous sonnet "The New Colossus" by Emma Lazarus.

Lazarus's poem contains the immortal lines: "‘Give me your tired, your poor, / Your huddled masses yearning to breathe free, / The wretched refuse of your teeming shore.'" Just prior to these lines on the plaque are inscribed the following lines: "‘Keep ancient lands, your storied pomp!' cries she / With silent lips." But in the handwritten manuscript for a collection of poems that Lazarus compiled in 1886, a year before her death, the phrase "ancient lands" is set off by commas: "‘Keep, ancient lands, your storied pomp!'"

"There's definitely a comma after the word ‘keep,'" said the publisher of Riverside Book Company Inc., Brian Eskenazi, who realized the discrepancy after Congregation Shearith Israel, the Spanish and Portuguese Synagogue, which once counted Lazarus as a member, commissioned him to publish a book on the 350th anniversary of the congregation. Mr. Eskenazi, who studied medieval and renaissance studies at Columbia University, said with one comma missing, the line was nonsensical or sounded as though what might be kept was "ancient lands" rather than their "pomp." The version on the plaque at the Statue of Liberty "didn't make sense to me as an editor," he said. (from The New York Sun)

Posted by Paul Vermeersch at 07:56