Unincorporated Persons in the Late Honda Dynasty by Tony Hoagland 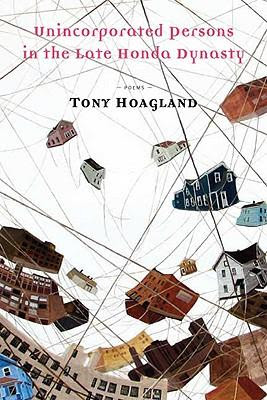 I'm really enjoying it, so I have to recommend Tony Hoagland's new book Unincorporated Persons in the Late Honda Dynasty.

As Dwight Garner points out in the New York Times, Hoagland "writes in an alert, caffeinated, lightly accented free verse" which at first glance might seem frivolous and rudimentary, but it would be high foolishness to accuse these poems of lacking the poetic rigor of more stringently blueprinted fare.

Deep down, Hoagland's poems address the growing malaise of our times, of a civilization drowning in its own disposableness. The voice of these poems isn't so much desperate for an authentic, emotional experience; it's more like the voice of someone who was once desperate for an authentic, emotional experience, but who has now given up the search, more-or-less, but is still open to the possibility. He holds a mirror up to our complacency and laziness and suburban comforts, and it should almost horrify us, except that it's so damn funny.

So potent is Hoagland's anti-tonic for the cushy, slovenliness of Western life, The New York times felt inclined to review the book twice, once by Dwight Garner (mentioned above), and again by Joel Brouwer, who said, "Hoagland rejects both the cynic’s lie that everything superficially beautiful must be rotten underneath, and the romantic’s lie that everything apparently ugly must possess some essential nobility."

Which is not to say that there is neither cynicism nor romanticism in Hoagland's poetry. I think there is plenty of both. Like chocolate and chili, Hoagland combines the two flavours into something powerful.
Posted by Paul Vermeersch at 11:27

I have it on order!