David Orr defends the Poetry Foundation
(...and questionsThe New Yorker's recent record when it comes to poetry, "fluffy chimney" and all) 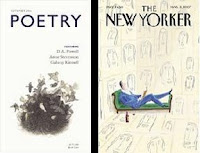 Remember that article in The New Yorker last month? The one in which Dana Goodyear skewers the Poetry Foundation's business-like strategies for promoting poetry? I wrote about it here, and I even agreed with some of her concerns.

Well, David Orr has written a rebuttal in the New York Times to set the record straight. Not only does Orr defend the position of the Poetry Foundation, at least against some of Goodyear's more strident attacks, he also goes on a counter-offensive, calling into question the credibility of The New Yorker when it comes to its coverage of poetry in general. And I find myself agreeing with Orr, too. Especially on the topic of the lukewarm turds of hackneyed verse that The New Yorker so often offers up disguised as actual poetry. In the past, I have often accused the poems that appear in The New Yorker of being "verse for sleazy lawyers who want to feel cultured." Here, Orr expands on how such a good magazine could publish such shitty poems.

And then there’s the question of the poems the magazine chooses to run. Granted, picking poems for a national publication is nearly impossible, and The New Yorker’s poetry editor, Alice Quinn, probably does it as well as anyone could. (Quinn is also liked personally, and rightly so, by many poets.) But there are two ways in which The New Yorker’s poem selection indicates the tension between reinforcing the “literariness” of the magazine’s brand and actually saying something interesting about poetry. First, The New Yorker tends to run bad poems by excellent poets. This occurs in part because the magazine has to take Big Names, but many Big Names don’t work in ways that are palatable to The New Yorker’s vast audience (in addition, many well-known poets don’t write what’s known in the poetry world as “the New Yorker poem” — basically an epiphany-centered lyric heavy on words like “water” and “light”). As a result, you get fine writers trying on a style that doesn’t suit them. The Irish poet Michael Longley writes powerful, earthy yet cerebral lines, but you wouldn’t know it from his New Yorker poem “For My Grandson”: “Did you hear the wind in the fluffy chimney?” Yes, the fluffy chimney.

But it gets worse. We might have suspected that a big, hip magazine like The New Yorker would be a wretched hive of nepotism and cronyism, but we were probably thinking about the suits in the advertising department, or maybe the effete snobs who deal with the theatre reviews, but certainly not the well-meaning people who select the poetry. And we'd be right. Right?

The second issue with The New Yorker’s poem selection is trickier. This is what you might call “the home job”: the magazine’s widely noted fondness for the work of its own staffers and social associates. The most notorious examples were the three poems The New Yorker published by the Manhattan doyenne Brooke Astor in 1996-7 (one more than Robert Creeley managed in his whole life). Some representative lines: “I learned to take the good and bad / And smile whenever I felt sad.” Even more questionable, however, is the magazine’s preference for its own junior employees. In 2002, for instance, the poet who appeared most frequently in the magazine was the assistant to David Remnick, the editor — that assistant’s name, coincidentally, was Dana Goodyear. In fact, since 2000, Goodyear (who is 30) has appeared in the New Yorker more than Czeslaw Milosz, Jorie Graham, Derek Walcott, Wislawa Szymborska, Kay Ryan and every living American poet laureate except for W. S. Merwin. She’s already equaled Sylvia Plath’s total.

But just because Dana Goodyear is so deep inside her own magazine's back door she might as well have the words "conflict of interest" tattooed on her face, does that excuse the Poetry Foundation's somewhat churlish president John Barr from thinking that schlock-traps like funny poem contests and the like are suitable promotional ventures for the venerable Poetry magazine?

No, I still don't think so. Poetry, the magazine, and poetry, the art form, both deserve better.
Posted by Paul Vermeersch at 08:42

Oh my. What a downer.