Tracking Down Alice in Bluebeardland

I loved the anthology we used in high school English class. At least I think I did. I remember reading things in it that weren't even assigned for homework, especially the poetry. Like many of my peers, I was hungry for culture, and here was a book with a variety of voices and experiences from the English Romantics to the American Modernists to Canadians doing their own renditions of Romanticism and Modernism. It was a book well suited to its purpose, and for anyone who bothered to open it, it offered an escape from the harsh pecking orders of secondary education and from the increasingly dismal environs of Sarnia, Ontario.

Sarnia in the late 1980s seemed a cultural wasteland. It had a shopping mall, and it had a beach, so at least the possibility of pretending to live out to the shallowest "valley girl" lifestyle was there four months of the year--even if the perfunctory Californian subculture was already passé, it was still exotic in Canada's "chemical valley." Not that pop culture was a reliable distraction; there was a fluctuating number of movie screens in town, and Sarnia was not a frequent stop for a lot of concert tours. Even if you wanted to get lost in your work, you had your work cut out for you. Often literally. Jobs were being cut, and many industrial positions that meant pensions for baby boomers were already being converted to contract and temp work for the next generation. Getting a summer job cutting grass at a petrochemical refinery had become a coveted privilege for anyone aged 16 to 25. The downtown core was already showing signs of demise. But there was this book...

I can't remember the title of this book, or who the editor or publisher might have been. It has been almost 25 years, after all. I believe it was green, but that is a common enough colour for anthologies of English literature. I do remember that this book was instrumental in my discovery of poetry, and I first read many of my early favourites in its pages. There was E. E. Cummings' poem "Buffalo Bill's" and William Carlos Williams' poem "The Red Wheelbarrow" which I thought was hilarious at first until I realized how sad it really is. 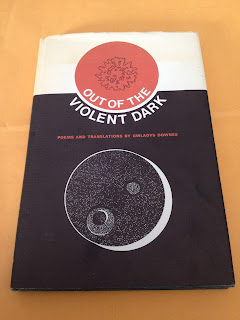 Gwladys Downes was a Canadian poet and translator who had a long and distinguished career as a professor of French at the University of Victoria. She was not prolific in her output as a poet, publishing only four volumes over a career that spanned half a century. The sparseness of her output has likely meant that she is not as well known as some of her contemporaries like P. K. Page and Phyllis Webb, but she was a fine poet in her own right and did much to advance the art form beyond the writing of her own poems. In addition to her role as an educator, she was a passionate and active translator of Quebecois poetry into English.

For many years I knew nothing of Gwladys Downes' work as an academic or translator, and, to be quite honest, I knew nothing of her work as a poet beyond a single poem of hers that was included in my high school English literature anthology. The poem was called "Alice in Bluebeardland," and I remembered only that I loved it.

As much as I tried, I could not remember the exact words of the poem, but I knew that it relayed the story of a girl who, having experienced some kind of metaphysical or existential horror, was forever altered in her ability to navigate the "real" world. I know that I likened it to the near-universal trauma of adolescence, and I appreciated the unsentimental appraisal of the damage done therein. It was a good poem to give to high school students, but this wasn't assigned reading. It just one of the many poems I discovered in this book, and its effects have stayed with me over the years.

I would sometimes look for books by Gwladys Downes in libraries and second-hand shops, but to little avail. I would occasionally happen upon House of Cedars, her last book of poems published in 1999, but never anything earlier than that, and so the poem "Alice in Bluebeardland" continued to elude me.

A few years ago, I began to search online in used booksellers' catalogues for Lost Diver, Downes' first collection published in 1955 by Fiddlehead Books, and for When We Lie Together, published in 1973 by Klanak Press, but these titles seemed to be lost to the digital age. Repeated searches of ABEbooks yielded only scattered postings for House of Cedars, which I had already acquired.

Recently, I asked several old classmates from high school if they could remember anything about our English anthology that might help me track it down, but none of them could remember any more than I could. Several weeks later, though, I tried ABEbooks again, and this time I was surprised by what I saw. There were a few listings for a Gwladys Downes book that I had not seen before: Out of the Violent Dark published by Sono Nis Press in 1978. I ordered it immediately, hopeful that "Alice" would be found inside.

The book arrived the other day, and I was instantly pleased with it. Other than some fading to the cover, and a strong, musty aroma of basement storage, the book was square and tight and in near fine condition. The volume itself was a de facto "new and selected" though not advertised as such. It contained poems taken from Downes' earlier collections as well as many of her translations of Quebecois poems that had appeared in various periodicals and anthologies over the years. And to my absolute glee, there it was on page 70, the very poem that I had been hunting for so long: "Alice in Bluebeardland."

It was everything I remembered it to be: stark, vulnerable, vivid, and riddled with suspense. Here was a poem that I had fallen in love with almost 25 years ago, a poem that made the tedium of "chemical valley" more livable for a curious teenager, and that helped me (though I might not have known it at the time) find the path to a creative pursuit that would occupy the rest of my life. 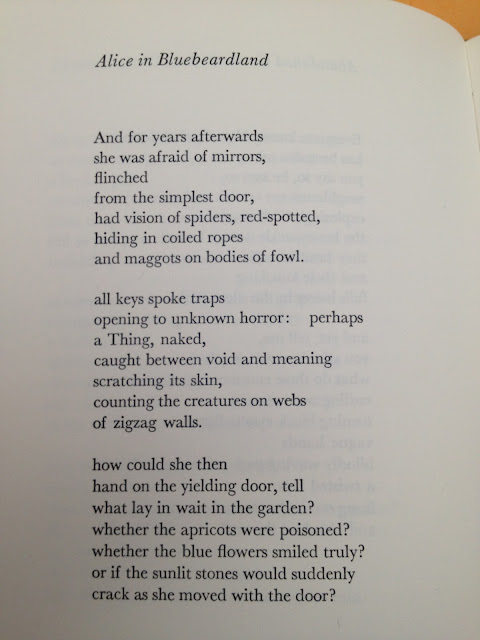 Posted by Paul Vermeersch at 14:42

Hey Paul, that's pretty cool. I had a similar feeling for a short story collection from Fiddlehead Books, Je T'aime Cowboy in the nineties, by a writer TF Rigelhoff. I rated the collection, and a story, Head with a Hole in it, partly because I was really into Mailer and Keruoac at that time and his stories were set in Halifax, New Brunswick and Montreal and they were all so good. Years later I wrote a note about it on the blog and to my surprise he contacted me and sent me a signed copy of Je T'aime Cowboy. And I went through the collection again. That was cool.

I love it when stuff like that happens, John. Thanks for sharing.

Wonderful poem, thanks for sharing